Since 2009, Ford’s Theatre Society has collected money through their annual production of A Christmas Carol for Washington, DC-area charities. Through their efforts and audiences’ generous support, they have raised more than $625,000 for charities dedicated to ending homelessness, hunger and poverty.

This year, Ford’s Theatre Society announced that the cast of the 2017 production of A Christmas Carol selected House of Ruth as recipient of this year’s donation drive inspired by the themes of charity in Dickens’ holiday classic.

“The holiday season is a time of great celebration and enormous need. The women and children survivors of homelessness and domestic violence at House of Ruth are deeply grateful for the generosity of the cast, crew and audiences of Ford’s Theatre. You are changing hundreds of lives and bringing A Christmas Carol to life,” said Sandra Jackson, Executive Director at House of Ruth.

During the curtain calls for performances of A Christmas Carol, the company will collect monetary donations on behalf of House of Ruth. Patrons can also make donations through the Ford’s Theatre Box Office. All donation checks should be made payable to “House of Ruth.”

A Christmas Carol plays at Ford’s Theatre from November 16 through December 31, 2017. Tickets are available for sale at https://www.fords.org/performances/current-and-upcoming/a-christmas-carol/. 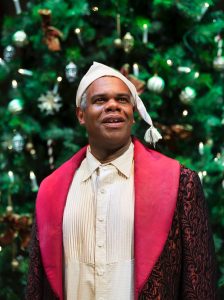