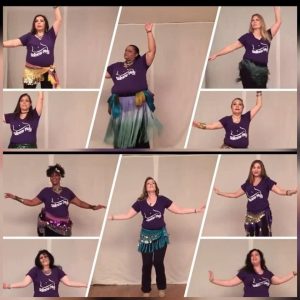 Let the shimmies resume — DC’s own belly dancing flash mob returned to Freedom Plaza on May 14.

Since 2014, Shimmy Mob DC, the city’s representative in the global effort to end domestic violence, has been one of House of Ruth’s annual partners to raise money through their May performance and fundraiser.

After a two-year absence due to COVID restrictions, this unique dance team will resume its live performances in downtown Washington, DC on World Bellydance day.

“It’s been a very rough time for everybody in general,” says team leader Sha’vei. “We are really excited for this year because for the past two years we’ve had to do video performances online. It’s great to be able to still participate in a manner of speaking, but nothing is better than being in front of a live audience. We continue our fundraising efforts for House of Ruth to support all its good works. It will be our ninth year this year!”

Shimmy Mob DC is one of over 200 teams globally that raise money for their local domestic crisis centers and their awareness programs. Headquartered in Canada, Shimmy Mob was started by Sabeya in 2011 and celebrated its 10th year during the COVID lockdown.

“It’s an absolute miracle that something like this has survived when so many things were shut down. It’s always good to be a part of a good cause but to also be a part of an effort that has had to endure such hardship as we all have and come out the better end of it is truly a blessing,” says Sha’vei.

Be sure to visit http://www.shimmymobdc.com to learn more about Shimmy Mob and what they do. On behalf of the staff, women and families at House of Ruth, we are so thankful for Shimmy Mob DC’s support!