After serving two years as Director of Operations at House of Ruth, and six months as Interim Executive Director, Sandra Jackson was hired as Executive Director on November 14, 2016. Here’s some of the who she is and why she relishes this valuable and important role. 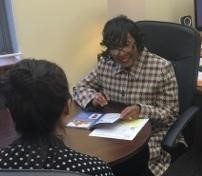 I was born and raised in Washington, D.C. Early on I saw myself as someone who was going to go to college – I had a track laid out for me in my mind. Where does that come from? For me, it came from my mom, who raised 5 children as a single parent. I am the youngest of those five.

She was a determined, persistent woman who did not go to college herself but she taught us all that we could do what we wanted to do. She was the matriarch of our family, as well as caring for her mom and dad when they were elderly– she took that on. My momma was my first social worker, she showed me what social work looked like.

I didn’t call it social work, but I knew I wanted to help people. I actually went to nursing school first—UDC—and I went into nursing. At some point, I decided that a better career path, that more fit who I was and what I wanted to do, was social work. I became familiar with Howard’s graduate school of social work and it was the best decision. It brought me back full circle to my mom and my yearning to help others.

I love working at House of Ruth because I do get to help people. Just last week a woman called to thank us for helping her. This woman was educated, employed and in her own home—but domestic violence was there and affecting her and her son. We serve many unemployed and undereducated women, but she shows what we all need to understand: domestic violence crosses all lines – it is not limited to people living in poverty. Because of the depth and breadth of support we offer at the House of Ruth, she is now living on her own again, and equipped with new emotional, financial and survival skills that she didn’t even realize she would need. From her and many others I’ve learned that domestic violence is always something that happens to someone else—until it happens to you.

But, as executive director, I do more than help people. I also raise funds to provide the help—and we have to talk about the shifting funding priorities and the unknowns around government funding right now. As these funds continue to shift and change, the House of Ruth cannot be beholden to those funds. Our mission cannot be compromised because of shifting government priorities. Too many women and children depend on us.

My passion at House of Ruth began on January 24, 1994. In my last semester of graduate school at Trinity College in DC, and I was planning on going to law school. My cousin and my mother had a really big fuss, and I mediated. My mother said, “You are an excellent counselor, you should consider going into counseling.” 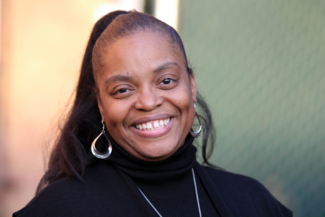 With that inspiration, I started applying for counseling jobs. Over the past 22 years, watching the growth of House of Ruth, and our programs, has been so valuable and meaningful. We serve so many women! We zoom in on their individual necessities, and focus on their greatest musts, whether that is domestic violence, substance abuse or mental illness. Our goal – always to provide a positive and lasting impression.

In all my years, the woman who has made the biggest impression on me is one that the police brought to me one night. She didn’t know anything but her first name, nothing else. It was like putting a puzzle together to find her date of birth, her last name, getting her on medication and getting her stabilized. From that we got her into three different programs and watched her grow and become a productive citizen who we are proud to call a House of Ruth success. It was a very long process, but it worked and it was well worth it. This practice proved, once again, that we do good work and it motivated me to keep going and keep pushing forward.

I believe that she would not have survived had it not been for House of Ruth.

I love my job. The clients that we serve make it all worthwhile.